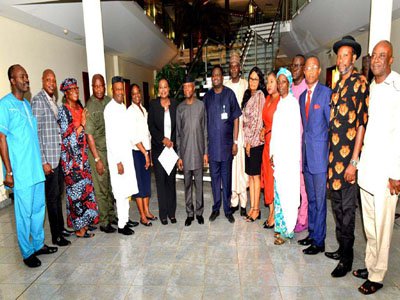 An umbrella body of Editors of various Newspaper organizations in Nigeria, the Nigerian Guild of Editors (NGE) has begged the federal government to place waivers on imported materials needed for the production of their newspapers.

NGE said that giving them waivers on their imported working materials would not becloud its sense of responsibility of professional duties to the nation and humanity.

Speaking to journalists after a meeting with the acting President and Vice-President of the Federal Republic of Nigeria, Prof. Yemi Osinbajo, NGE’s President Funke Egbemode said the media are in business, like every other business contributing to the economy.

She said the industry would need such support to stay in business.

Egbemode, who led other NGE executives to the Villa in Abuja, the nation’s capital, noted that the industry was in distress.

The NGE president stressed that since the guild is not a non-governmental organisation (NGO) but a part of business concerns that pay taxes and pensions, it would need cushions, intervention funds to remain in business.

“We are leaders in the newsrooms, as editors, and we want to partner, we want opportunities to train and re-train. We also came to talk about the distress in the industry. You know, we are not NGOs; we are businesses and a sector of the economy. So, we came to talk about this sector. What are the things that are available, the opportunities that are available for us as businesses?

“Yes, we are professionals. We know what to do. Like former President of the Guild, Mr. Femi Adesina said, we can’t get into bed with any government. We have a job to do. We will do it without fear or favour. But we are also businesses. We are taxpayers, we pay pensions and do every other thing that businesses do. “So, why is it that we are able to support everybody, every sector? Can we get support also as businesses? Can the system provide cushions for us? Can we get intervention funds? Our discussions were fruitful,” she said.

Egbemode, who described the discussion with Prof Osinbajo as fruitful, assured the nation that the media would remain professional in the discharge of their duties.

The NGE president lauded the positive response from the Vice President, saying: “He (Osinbajo) has told us areas we can explore as a sector and that when we start working on it, it is possible that certain projects in the media can be looked at by the Central Bank of Nigeria (CBN) for intervention. But you know, it is business. I am sure, terms and conditions would apply.”

Asked to mention the intervention funds expected, she said: “It is work in progress. It is something we can go and discuss with the CBN and other agencies. We are just starting because we don’t want media houses to continue to die. We lose jobs, but we help build the society. We help to build other businesses. We just think that we should not continue to work but extend our frontiers and look for opportunities so that we can create jobs.

“The government is interested in creating jobs and we should help them in creating jobs. We should show them how job losses can occur, and that’s the whole essence of asking for partnership, for opportunities to open doors for interventions in our industry. It is not about selling our souls; it is not about doing anything unprofessional. We have a job to do and we will do it. It doesn’t matter who we have dinner with.”

On whether she was not afraid that when government supports the industry, it would expect complete patronage from the media, Mrs Egbemode said: “It is not that kind of patronage. Is the government going to say that because we report good stories, we should not pay taxes? We pay taxes. So, we are talking as businesses. We are talking about things that concern an industry and we should not pretend as if all is well.

On the collaboration between the guild and the Nigerian Union of Journalists (NUJ) to check quacks in the profession, she said: “It is a permanent effort. Everywhere there are originals, there will be attempts to create the fake.”