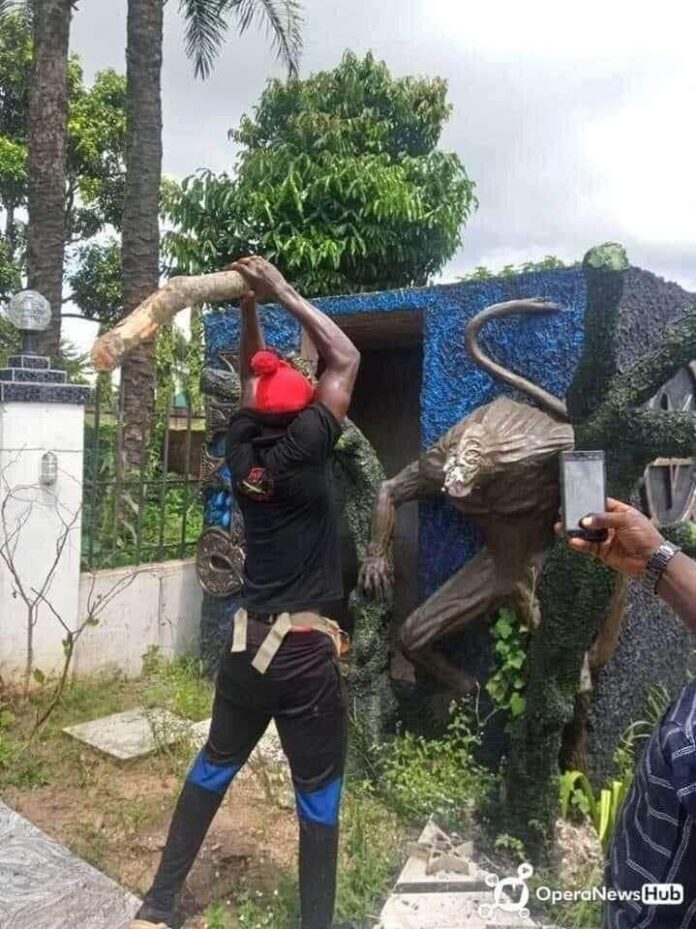 Udo is said to be cooling off in police custody after being whisked away by a team of personnel of the Abia State command of the Nigeria Police Force.

It was gathered that before the arrival of the police team, apparently invited by the Transition Committee Chairman; Fred Idika, the angry youths had already pulled down his church building and other monuments/statues in the compound.

It was gathered that police had arrested Udo, also known as Lucifer or Fada-Fada earlier in the week for violating the lockdown protocol directives of both the state and federal government.

Udo, who is reported to own a brothel in Ohafia was also said to have been arrested for allegedly terrorizing the community and this led to the youth of the area destroying the satanic images outside his church when he was arrested.

A native of the community who gave his name simply as Kalu said people of Ohafia knew his evil practices but nobody could confront him because of his claimed connections with evil forces.

“There is nothing people cannot do now just for money and power. He claims to have the power Satan has. He is known to use voodoo power on his members and has been getting away with so many things until now.

“It was a thing of joy and happiness for the people of Ohafia around the world that this man has been arrested by the police. Udo became popular few years back when he established his Church of Satan and began to give some jobless youths in the community motorcycles on hire
purchase”.

Another source who simply identified himself as Chukwudi said “the evil that this man commits in this community is too much. The destruction of his church was done not only by youths in the villages but including others that came from Lagos, Abuja and Port Harcourt.

“This man has been snatching wives from men with charm. He has been doing all manner of things including collecting land by force.

“We learnt that he made young men to deposit their sperm in a calabash. His hotel is known for series of notorious activities including promoting prostitution and homosexuality. Our youths are becoming irresponsible and wayward as a result of this man’s activities.

“He is dragging the name of our community to the mud and that is why the youths have decided to rise up against him, because if this is allowed to continue, the danger it will bring to our community and the state in general will be unimaginable.”

Chairman of Ohafia Local Government Area, Idika said the state commissioner of police alerted them that the founder of the Church of Satan, Ohafia violated the COVID-19 protocol directives and that they were coming down to shut the place, and that police went there with the Mobile Court to shut down the church.

The council boss said before now, Udo and others had been arrested by police from Force Headquarters, Abuja “under offend I do not know about, but until they are arraigned, we should be able to know why they were arrested”.