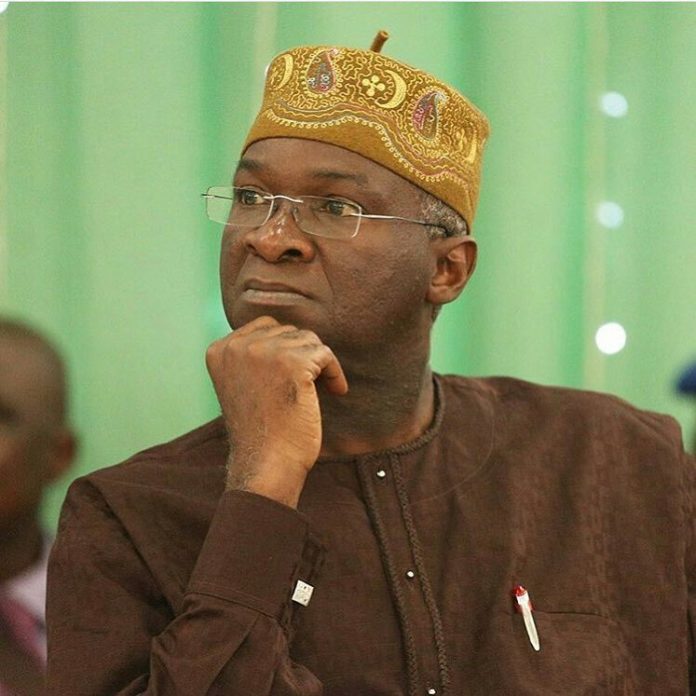  The Minister of Works and Housing, Babatunde Fashola at the weekend said he was misquoted on the claim that federal roads were not as deplorable as the public portrayed them.He maintained that he did not use the word ‘exaggeration’.

The Minister of Works and Housing, Babatunde Fashola at the weekend said he was misquoted on the claim that federal roads were not as deplorable as the public portrayed them.

He maintained that he did not use the word ‘exaggeration’.

It would be recalled that the minister had on Wednesday in Abuja at the Federal Executive Council (FEC) meeting said Nigeria’s road surfaces were not as deplorable as the public have made them to be.

Fashola who said contrary to insinuations on social media, he had travelled round the country on roads to access condition of federal roads, maintained that the federal government would fix its bad roads based on priority list.

The Minister said, “Let me start from the journey by roads to the 36 states, 12 hours everyday, so I know what I saw, and I also said what I wanted to say in that press conference, and thankfully, I must thank your TV Channels, at least, showing the maturity and the professionalism responsibility to play the whole tape, so people can see the context of what I said.”

On PDP’s claim that he should resign and apologise to Nigerians over the comment, Fashola simply said, “I didn’t use the word ‘exaggerated’, I didn’t say that. Please go and listen to what I said, thank you.”

Fashola also reiterated that the federal government would not refund any state that rehabilitates or reconstructs federal roads.

He added that the bill for road refund from state governments was on the high side, amounting to N500b

The minister praised Chief Ade-Ojo for his giant strides, stressing that government can not do everything and urged Nigerians to emulate the good works of the business expert.

He described him as a great visionary, appreciating his venture into infrastructural development especially on the rehabilitated three roads within the town and Ilara-Ikota road for the benefit of the neighbouring community, which will further unite the two communities.

Ade-Ojo said he was elated that another development effort has been successfully completed.

The founder, Elizabeth University charged other well-meaning Nigerians to give back to their society for posterity sake.