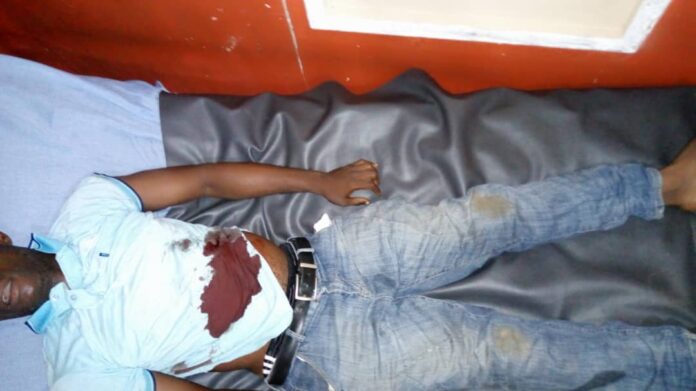 A trigger-happy policeman serving under the Abia State Police Command whose name is yet-to-be known has reportedly killed two persons in Aba, the commercial nerve of the state.

Efforts to reach the Commissioner of Police in the State, CP Janet Agbede proved abortive as she, until the time of this report failed to pick calls to her phone and yet to respond to the text message sent to her mobile line. But a senior police officer in Abia Command confirmed the incident.

According to the police source, normalcy has since returned and the police have commenced an investigation into the matter.

Unconfirmed report has it that one of the persons hit by bullets from the happy-trigger policemen died at the spot, while the other later died in a private hospital where he was reportedly rushed for medical attention.

One of the deceased who was identified as Ifeanyi Kalu is said to be a member of the Abia State Board of Internal Revenue (BIR) Task Force operating in Aba.

The incident, our reporter gathered angered the youths who had mobilized to attack the policeman, but it took the combined team of the Nigerian Police Force, Aba Area Command and Soldiers around the popular Bata junction to restore calm in the area.

According to reports, the policeman was invited by his friend after personnel of the Abia State Board of Internal Revenue Task Force had tried impounding his car for using a private car for the sale of bread.

A source “we learnt that the man was using a private number plate SUV to sell bread when the task force met him. They started arguing and the man was telling them that there was nothing wrong to use his private car to sell or distribute bread. It got to a point that the thing started turning into almost a fight.

“We learnt that while the quarrel was ongoing, a policeman who was reportedly invited to the scene by the jeep owner came and met the already chaotic scene. It was in the midst of the confusion that the policeman apparently in a bid to scare the crowd and restore sanity, the bullet from his gun hit the BIR task force member in the stomach and a passerby.

READ ALSO:   4.48million Nigerians apply for N-Power jobs
Disclaimer: infonte9ja.com shall not be liable to Opinions, Articles or Features that doesn't emanate from any of its staff and management. We also wish to reiterate that such personal or sponsored opinion, article or feature does not reflect the views of the publishers of infonet9ja.com, but the writer's For publication of your news content, articles, videos or any other news worthy materials, please send to infonetnews9ja@gmail.com | For Advert and other info, you can call 09061217047 or send a WhatsApp Message to 09061217047

“One of them died at the spot while the other person died in a hospital where he was rushed for medical attention. We don’t know if both of them are BIR task force members, but one of them, we understand is Ifeanyi (Kalu).”