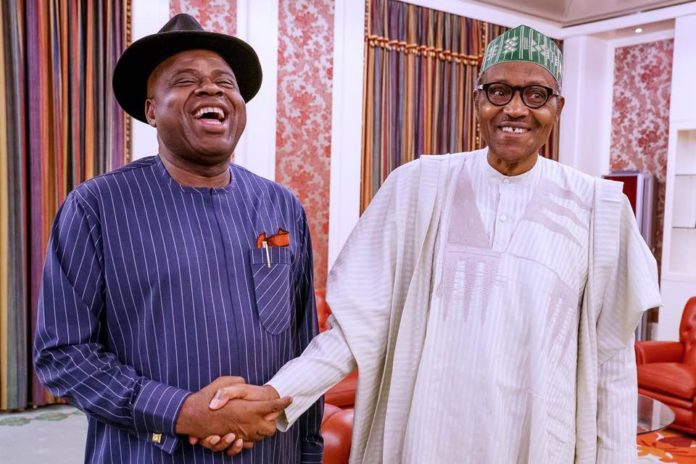 Addressing State House Correspondents after the meeting, the Bayelsa State governor said he was visiting the President privately, adding that it was his first call on him since he assumed office as governor.

Describing his reception by President Buhari, Senator Siri said he was warmly received by the President, adding that it was like a father receiving his son.

“Since I resumed as Governor of Bayelsa State, precisely on the 14th of February, I have not come to see the father of the nation. Today I just did that: to come and see the father of our country and to work with the federal government of Nigeria in ensuring peace and stability in my state and ensuring the development of my state.

READ ALSO:   Abia Speaker's Visit to OUK and the Misfortune of Mischief Makers

“Mr. President received me as one of his sons, as a state governor and the reception was very warm. He went ahead to advice that he was happy that I came and that he was happy with the way I have started. He went on to say he has read about all the statements that I have made and the security so far in Bayelsa.

READ ALSO:   Returnee Nigerians to pay for quarantine
Disclaimer: infonte9ja.com shall not be liable to Opinions, Articles or Features that doesn't emanate from any of its staff and management. We also wish to reiterate that such personal or sponsored opinion, article or feature does not reflect the views of the publishers of infonet9ja.com, but the writer's For publication of your news content, articles, videos or any other news worthy materials, please send to infonetnews9ja@gmail.com | For Advert and other info, you can call 09061217047 or send a WhatsApp Message to 09061217047

“He promised as one of his sons, a state like Bayelsa that is critical to the security and peace in the Niger Delta, he was prepared to also work with me,” the governor said.