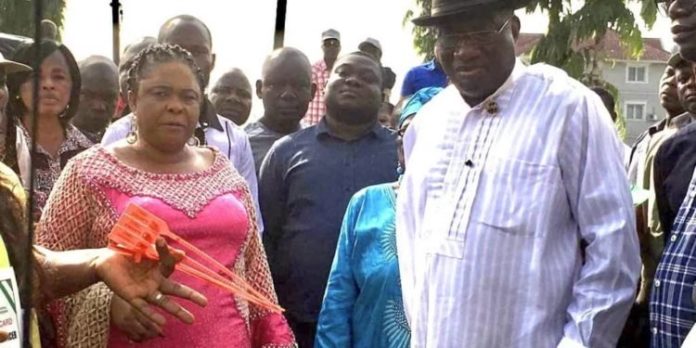 Former president Goodluck Jonathan, casts his vote along side his wife Dame Patience Jonathan, in their hometown, Otueke, Bayelsa State.

He beckoned on the good people of Balyesa and Kogi states respectively to remain calm as the election continues.

Jonathan, who was expecting to cast his vote, stepped out of his house at 8:30 a.m., but met only journalists as the Independent National Electoral Commission (INEC) officials were yet to arrive at the venue.

“Are you an electoral officer, where are they?” The former president asked a journalist at the venue.

“Well this is where I will vote, but since they are not here yet, let me go back inside.

“You see now, youths of nowadays, you need to do more,” he stated. The News Agency of Nigeria (NAN), reports that at the time of filing this report at 10:30 a.m, no official has arrived at the polling unit with materials for the exercise.