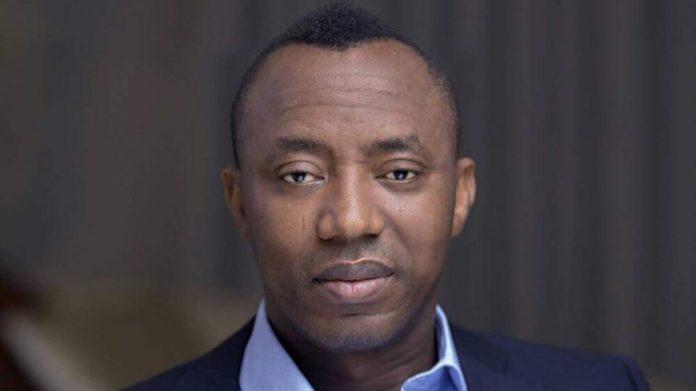 Rather than direct immediate compliance with a federal court order that freed Omoyele Sowore on bail, President Muhammadu Buhari has instead been sending emissaries to the activist to extract commitment from him to back down on the ‘revolution now’ protest as a precondition for his release.

In at least two attempts now confirmed by PREMIUM TIMES, the president’s emissaries visited Mr Sowore where he is being illegally held at the State Security Service Headquarters to “negotiate for peace” in return for his freedom.

The Sahara Reporters’ publisher, however, rejected both attempts as extra-judicial and self-serving, saying he would not take part in any arrangement that would essentially lend legitimacy to unwarranted abuse of his fundamental rights and brazen disregard of judicial authority, people briefed on the matter told PREMIUM TIMES.

The development appeared the strongest indication yet that Mr Buhari is aware of the continued detention of Mr Sowore in defiance of multiple court orders.

Mr Sowore was arrested on August 3 for leading #RevolutionNow campaign — a series of nationwide protests he had planned with other activists to demand a better Nigeria.

He was first granted bail by a federal judge in September, but the SSS did not comply and instead took him before another judge to file duplicated charges against him. The second judge granted him bail under stringent conditions in October, which he eventually satisfied on November 6.

Both court orders were ignored and Mr Sowore remained in illegal custody of the SSS, a Nigerian domestic intelligence outfit under direct and absolute control of the president.

As calls mounted on the Nigerian government to respect Mr Sowore’s rights and obey court orders for his release, Mr Buhari hastily arranged a team to pressure the activist into an agreement that would see him abandon his #RevolutionNow campaign before he could be freed.

“The first meeting took place in the office of SSS director of operations, ” a source told PREMIUM TIMES. “The group met Mr Sowore and said they came on behalf of the president to negotiate for peace.”

But Mr Sowore, a former student union activist who confronted military regimes and suffered attacks and persecution for it, “refused openly,” saying “all he wants is justice.”

Mr Sowore insisted he would not compromise his demand for a new Nigeria that works for all citizens, a defiance that shocked those present at the meeting, including Mr Shehu who led the team, another source said.

PREMIUM TIMES learnt that members of the delegation were “infuriated” by Mr Sowore’s “refusal to dialogue” with them under the conditions outlined.

Mr Sowore’s firm repudiation of the president’s delegation also angered Yusuf Bichi, the head of the SSS, who subsequently ordered his continued detention while making him incommunicado.

Mr Sowore had threatened to inform his lawyer, Femi Falana, of Mr Buhari’s moves, leading the SSS chief to deprive him of all forms of contact with anyone outside the facility.

Contacted by PREMIUM TIMES, Mr Obaigbena denied ever being part of the delegation that met Mr Sowore.

But another member of the team, Mr Funtua, said, “I went to meet him (Sowore) with Sam Amuka, Nduka Obaigbena and some others. We were there for two hours to discuss with him that there was no need to be grandstanding with his lawyers.”

When asked to comment on SSS continued defiance of court order over Mr Sowore, Mr Funtua said he was aware of it, but that the state has nothing to lose.

Another fruitless attempt was made to get Mr Sowore to back down on his agitation earlier this month while the president was vacationing in London, sources said.

“This one was led by Femi Adesina,” the source said. “Again, he refused to even see Mr Adesina, saying he cannot negotiate with them under any circumstances, especially since he has been granted bail.”

To further punish him for rejecting yet another presidential delegation, Mr Sowore was denied access to his letters and rarely allowed to take fresh air.

The restrictions were later briefly relaxed and Mr Sowore was able to speak with PREMIUM TIMES from custody on November 14. The phone with which he spoke with this newspaper was immediately seized even though it was given to him by the SSS which discreetly monitored his communications.

The previously unknown but concerted attempts to talk Mr Sowore out of #RevolutionNow campaign underscored not just the suffering of the Nigerian activist but the dilemma his illegal detention and remarkable display of courage have placed on the Nigerian government, said legal analyst Helen Okeka.

“The government is obviously having a sleepless night on this matter,” Ms Okeka told PREMIUM TIMES Friday morning. “It is not easy to attain a reputation of lawlessness, especially blatant and unprecedented disregard of court order.”

Mrs Okeka said the officials responsible for keeping Mr Sowore in custody in defiance of multiple judicial pronouncements on the matter are not oblivious of the potential consequences of their roles.

“They know that one day would come when they would have to face the music for this,” the lawyer said from Owerri. “There are some things you just cannot get away with, no matter how long it takes.”

Many Nigerians had suspected the government’s predicament from the controversial statements by the SSS on why Mr Sowore was still being kept in custody.

The statements, critics said, were so weak in law, logic and substance that many could not come to terms with the reality that they were issued by the country’s preeminent domestic intelligence outfit.

The efforts were repeatedly pushed as Nigerians took to the streets to compel the SSS to respect the country’s judiciary and stop seeing itself as above the law. Even though SSS operatives used force against activists and journalists who covered the protests, the demand for Mr Sowore’s release has intensified.

Internationally, protests were held in the United States earlier this week for Mr Sowore’s release to enable him to see his young family for the first time in several months. Nigerian professionals from leading institutions across the world also signed a statement calling for his release earlier this month.

Rights groups have asked the government to obey courts in Mr Sowore’s case, with Amnesty International designating him and two orders prisoners of conscience.

Earlier this week, United States lawmakers joined the calls for Mr Sowore’s release and warned that any attempt to further stifle the country’s civic space in violation of international treaties would not be acceptable to the international community.

The Buhari administration also faces a potential clash with the judiciary if Mr Sowore is not released before his scheduled court appearance on December 5 and 6.

Already, Ijeoma Ojukwu, the judge handling the case who granted him bail, has threatened to hold Mr Bichi in criminal contempt of court for defying her order.

It was unclear how the secret police would explain the disregard of the judge’s order to her. There are suspicions that the activist may not be produced again in court as was the case with Sambo Dasuki, erstwhile national security adviser being held since 2015 against court orders.