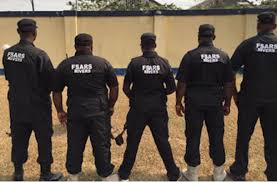 Yet-to-be identified leaders of two notorious gang of armed robbers operating in Umuahia, the Abia State capital Aba, nerve of the state have reportedly been arrested by operatives of Special Anti-Robbery Squad (SARS) under Abia State Command of the Nigeria Police Force (NPF).

Information gathered has it that two robbery gangs specialize in car snatching and robbing supermarkets.

The leader of the gang operating between Isiala Ngwa-Osisioma axis of the Enugu-Aba-Port Harcourt was said to have been tracked and arrested at a brothel at Ajata Ibeku; an interior village in Umuahia North Local Government Area of the state which serves as a hideout for kidnappers.

The operations were said to have been led by one Police Superintendent; Obioguru Johnbull, the State Commander of SARS who upon the mandate of the Commissioner of Police in the State, CP Okon Ene to rid the capital city and its environs of criminal elements, have carried out raids in several communities where camps belonging to members of armed groups terrorizing the state have been dislodged.

Sources in Abia State Police Command told our reporter that the Commissioner of police had been inundated with several petitions and calls beckoning for his attention due to the rise in criminal activities in Umuahia and its environs.

When contacted, the State Police Chief in a telephone interview confirmed that the four suspects were in their custody.

According to the Police Commissioner, the gangs were responsible for various armed robbery and kidnapping operations along the Enugu-Aba-Port Harcourt Expressway.

The Police Commissioner, who stated that the gangs operate around bad spots on the busy expressway, disclosed that the SARS team also recovered arms from them.

“Once investigation is concluded, justice will be done,” Ene assured.