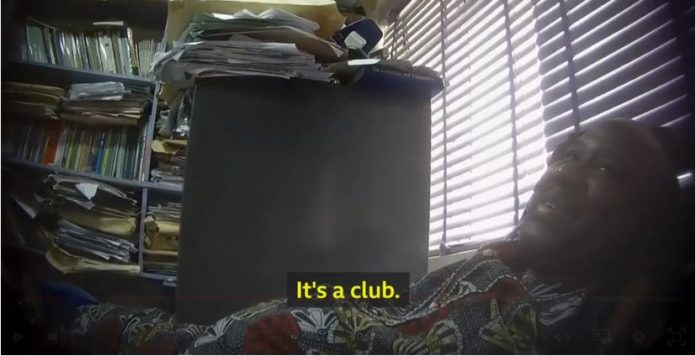 A documentary filmed by Africa Eye, a BBC Programme, has exposed one Dr. Boniface Igbeneghu of the Faculty of Arts at the University of Lagos for soliciting sex from students in exchange for good grades.

In the video, Igbeneghu, also a Senior Pastor at Foursquare Church, is seen speaking inappropriately to a reporter disguised as a 17-year-old admission seeker.

He had told the teenager that sex for marks is nothing new in Nigerian universities. He explained that his peers use the Senior Staff Club in the university premises for their illicit activities. He said an upper area at the club, which is famously called the ‘Cold Room’ is where the deed is done.

Igbeneghu, who met with  the teenager severally, prayed with her during which he asked her to give her life to Christ. He afterwards went into his usual flirtatious discussions with her. In the video, he kept reminding her to be obedient to him else he would not help her get admission.

The documentary also spoke to past students who confirmed that Igbeneghu was a serial sex-for-marks lecturer in the faculty.

One revealed that he had been smooching her while he was writing Bible verses for his Bible study later in the day.

The University of Lagos, according to the report, dissociated itself from all acts of sexual harassment by lecturers. It however remained silent on questions about the ‘Cold Room’.

In another investigation, one Paul Kwame Butakor of the College of Education at the University of Ghana, was also caught demanding for sex from a would-be postgraduate student.

Butakor was seen asking to be the student’s ‘side guy’, a term for second boyfriend. While encouraging her to consider his advances, he promised t be helpful to her career.

The report says the University of Ghana has dissociated itself from sexual harassment, condemning it in strong terms.