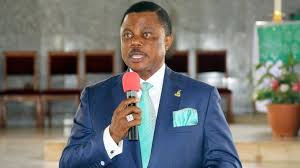 The Governor of Anambra State, Chief Willie Obianoa has declared November sixteen as public holiday in the State, in honour of the Late Chief  Nnamdi Azikiwe for his contributions to the history of the country.

Governor Willie Obiano made the declaration at the Dr Alex Ekwueme Square, Awka, during a ceremony to mark this year’s fifty-ninth Independence Day Anniversary in the state.

Governor Obiano dressed in the traditional white attire with the traditional red cap to fit, which represented the great Zik’s attire at the Tafawa Balewa Square fifty-ninth years ago.

He thereafter, mounted the dais to take the salute, after which he inspected guard of honour, by the police and other security agencies in the State.

Speaking on Anambra state, the Governor said the State is on a steady rise, leading the way in the scheme of things, among comity of States in Nigeria, stressing that Zik’s sacrifices paved way for what the country is currently enjoying, adding that the November sixteenth public holiday will be about reflections on the life and times of Zik.

READ ALSO:   COVID-19:Abia govt extends lock down by one week

He assured of his commitment in keeping the State on stable growth.Also speaking, an APGA Chieftain, Chief Dan Ogbuefi, said that the gesture of dedicating a day for Zik’s remembrance is commendable, calling for concerted efforts at preserving his legacies, which he explained, is the foundation for the entity called Nigeria.

Chief Rommy Ezeonwuka also appreciated the fact that Nigeria is a developing Nation, noted that Anambra State, despite few challenges, is making progress, calling on the State citizenry to exercise patience with APGA-led government, as its action plans in the coming years are laudable.