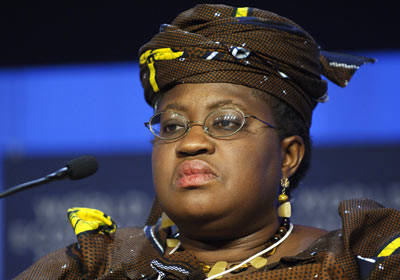 The former minister through her spokesperson, Paul Nwabuikwu, in a statement yesterday announced the death.

Okonjo-Iweala, in the statement, said his father died in Lagos soon after he arrived from a trip to the United States and Ghana.

“He died in Lagos soon after he arrived from a trip to the United States of America and Ghana. We are immensely grateful that his last moments were peaceful and that he died the same way he lived his life – with quiet dignity.

“Daddy was an accomplished man on so many levels – a highly respected academic, international public servant, university administrator, intellectual and traditional ruler. My father touched so many lives personally and professionally,” she said.

The former World Bank Chief added: “It is a tribute to the kind of life that Daddy lived that on his 90th birthday last year, a delegation of old students of Ibadan Boys High School presented him with a letter of commendation written in 1953 in which a colonial education administrator praised him highly for the all-round improvements he achieved in the school within a short period of time. He was only 25 then.

READ ALSO:   Eleven suspected cultists in Police net ...they will be arraigned in court soon-Police CP

“Daddy was a passionate intellectual and prolific writer whose last book was published at the age of 90. He touched so many lives personally and professionally and was an unrelenting believer and practitioner in the power of education to transform lives.

“In pursuit of this commitment, Daddy sponsored the education of at least 19 students up to university level in addition to his own seven children. He inspired and motivated so many more.

“Having witnessed the ravages of war, he was committed to unity and peaceful coexistence of all. From his marriage of 66 years to our mother, Prof. Kamene Okonjo to his dedication to duty, he was exceptional.”

READ ALSO:   Abia Govt finally nabs fleeing suspected COVID-19 patient
Disclaimer: infonte9ja.com shall not be liable to Opinions, Articles or Features that doesn't emanate from any of its staff and management. We also wish to reiterate that such personal or sponsored opinion, article or feature does not reflect the views of the publishers of infonet9ja.com, but the writer's For publication of your news content, articles, videos or any other news worthy materials, please send to infonetnews9ja@gmail.com | For Advert and other info, you can call 09061217047 or send a WhatsApp Message to 09061217047

The former Finance Minister on her verified twitter account @NOIweala, tweeted “It is with thanks to Almighty God that I announce two impactful events: the Ascension to the throne of the Ogwashi-Uku Kingdom of my brother, Obi Ifechukwude Chukuka Okonjo, upon the passing away of my father Obi (Professor) Chukuka Okonjo at the age of 91.”