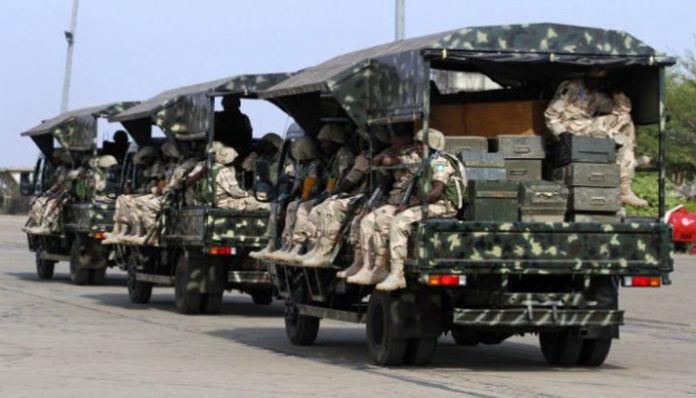 Our correspondent gathered that the youths of the community descended heavily on Ogbonna when they learnt that he allegedly killed his 52-year-old mother.

Sources at the community told our reporter that if not for the timely intervention of the soldiers attached to the Army checkpoint at Akpaa Mbato village along Aba-Azumini Highway, Ogbonna who was already beaten to pulp would have been burnt alive by angry youths of the community.

Ogbonna, the last son of his mother was accused of not only having sexual affairs with sisters of the same parents at his maternal home, but impregnating one of them in the process; an act which the villagers said was a taboo in their community and Igbo land in general.

Defiant Ogbonna was said to have ignored the warning of the community to continue sleeping with one of the sisters whose name was simply identified as Ugochi which didn’t go down well with the sick mother.

According to a source, Ogbonna’s mother who was managing her Blood Pressure condition angered by the son’s action and the negative effect his abominable act would bring to the family, decided to raise her alarm after she noticed that her son slept with Ugochi the previous night.

It was learnt that Ogbonna in the heat of an argument with the mother kicked her on her ribs which aggravated her health condition.

She was said to have collapsed and died shortly afterwards when some members of the family who came to her rescue tried stabilizing her.

A member of the community who pleaded not to be named said that Ogbonna on seeing that the mother had died tried to run away but they however prevented from doing so.

The source said that when the news filtered into the community the youths stormed their compound and took Ogbonna with them to unknown destination.

The family source said that the youths after beating Ogbonna to pulp was on the verge of setting him ablaze when the soldiers were alerted and later rescued him from the villagers who had already hanged tyre on his neck and about to pour fuel on him, adding that Ugochi was until the time of this report still at large as she had ran away to unknown destination immediately the incident happened.

A soldier at the Akpaa army checkpoint said that they mobilized to the scene to save the suspect from jungle justice when they were alerted of the action the youths of the community were about to take.

The soldier stated that Ogbonna confessed to the crime and has been handed over to the Azuka Police Station for continued investigation into the matter and further prosecution.

The Police Public Relations Officer of Abia State Command, DSP Geoffrey Ogbonna could not be reached for comments, but a senior police officer at the Azuka police station confirmed that Ogbonna was brought to the station at the weekend by the soldiers in army Hilux van.