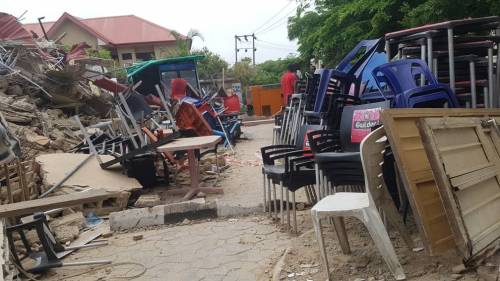 The Federal Capital Territory Administration (FCDA) has demolished the Caramelo Lounge which was located at Utako in Abuja for violating land use act.

The Managing Director of the club, Max Eze who said that the authority served them quit notice on Friday 10th May at 7:00pm.

He added that to their surprise the FCDA mobilized their bulldozers, with police cordon around the building, and started pulling it down on Monday.

Eze expressed shock at the manner in which the demolition was carried out as the officials did not allow them to take anything from the building.

The Managing Director who was visibly angry and disturbed refused to comment further as he moved round the wreckage helplessly.

It was gathered that the FCDA authority arrived the scene as early as 7:00am and asked the staff and guests out of the building before the demolition.

When our reporter visited the building, staffers were seen lamenting over their loss.

Some miscreants had besieged the scene of the demolition to loot some of the valuables that were trapped.

But police drafted to the area were able to stop them and made some arrest.