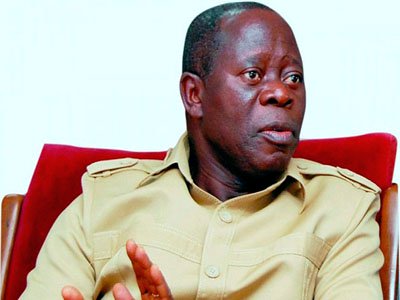 The executive committee of the All Progressives Congress (APC) in Ward 10, Etsako West Local Government of Edo has lifted the suspension slammed on Comrade Adams Oshiomhole last year.

Seventeen of the 27 executive menbers presented the resolution to the acting National Chairman, Senator Abiola Ajimobi, who was represented by the National Vice Chairman, Hon. Hillard Eta at the National Secretariat of the party in Abuja on Saturday.

Oshiomole has been in the eye of the storm following Tuesday’s Appeal Court affirmation of his suspension by a Federal High Court in Abuja, triggering a leadership tussle in the party.

Presenting the resolution of the executive committee of the ward, which held on June 4 at the party Secretariat, Apana-Uzairue, Edo, the ward secretary, Emuakemeh Sule, said the committee had reviewed the circumstances leading to the suspension of Oshiomhole and found no merit in the allegation or processes employed.

The resolution reads: “We the undersigned, being the Executive Committee of All Progressives Congress (APC) in Ward 10 Eisako West L.G.A, Edo State having met today 4/ 6/2020 affirm the following positions:

“That we have reviewed the circumstances leading to the suspension of Comrade Adams Oshiomhole and found no merit in the allegation or processes employed.

“We hereby lift the suspension placed on Comrade Adams Oshiomhole by the Ward.

“We call on all organs of our great party to restore all rights and privileges of membership to Comrade Adams Oshiomhole”.

Accepting the resolution, Eta commended the committee and noted that 17 of the 27 executive committee members had the simple majority needed to lift the suspension.

According to Eta: “In matters of this nature, our constitution provides for only a simple majority and 17 out of 27 is indeed more than a simple majority. So, we want to use this opportunity to thank Etsako West Ward 10 for what they have done. History will be on your side.

“I am also in receipt of the acceptance and ratification of the resolution by the Etsako West LGA executive dated the 9th of June 2020 and signed by the Chairman, Alhaji Abubakar Akokia and the Secretary, Hon. Dauda Ahmed.

“I am also in receipt of further ratification by the state executive committee of the APC in Edo state signed by Col. David Imuse (retd), the acting state Chairman and Lawrence O. Oka, state Secretary.”

He assured the ward leaders and National Working Committee (NWC) would meet to do the needful over the matter.