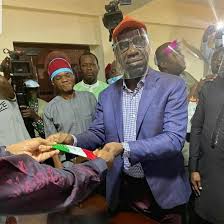 He joined the opposition party at its State Secretariat in Benin.

The party confirms the development in a tweet on his official handle.

Obaseki had been disqualified from seeking reelection by the ruling All Progressives Congress(APC) on the grounds that he possesses “defective qualifications.”

Obaseki in a tweet using his official twitter handle; @GovernorObaseki said “I have officially joined the @OfficialPDPNig to advance my ambition to seek re-election as Governor of Edo State.

“I, as always, remain committed to engendering good governance and sustainable development of our dear state.”

PDP in a tweet also confirmed that Gov. Obaseki has joined the party.

Breaking News! The governor of Edo State, H. E. @GovernorObaseki has defected to our great Party, the @OfficialPDPNig.

“The declaration was made this afternoon at the state Secretariat of our party in Benin city, Edo State.

“Power to the people. #EdoIsPDP.