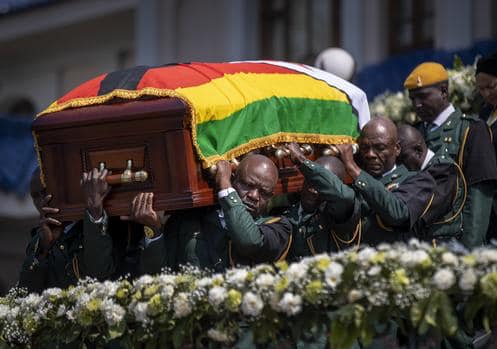 The complex remembrance process for longtime Zimbabwean president Robert Mugabe continued Saturday with a state funeral. Mugabe, who was ousted in a 2017 military coup, led Zimbabwe for 37 years and died last week at a Singapore hospital.

NPR’s Eyder Peralta, speaking with Weekend Edition from the funeral in Harare’s National Sports Stadium, called the scene “disjointed” — in part because Mugabe’s family was in attendance right alongside the president and military who had pressured him out of office. Zimbabwe’s current president, Emmerson Mnangagwa, had once been Mugabe’s spymaster and mentee, but the two had a consequential falling-out.

Still, Peralta said, the government “pulled out all the stops” for the state funeral. There were military and police bands, and world leaders were brought in — including the presidents of Kenya, South Africa, Ethiopia, Angola and Mozambique.

Mugabe’s burial will be delayed for at least a month, because the Mugabe family and the government have been negotiating how and when the leader will be laid to rest. According to The Associated Press, the government had planned to bury Mugabe in a “simple plot” next to other Zimbabwean national heroes, but Grace Mugabe, his widow, had wanted a private burial instead. The current plan is to construct a new mausoleum for Mugabe over the next 30 days.

Walter Chidhakwa, who spoke at the funeral on behalf of the Mugabe family, referenced the emotional effect the coup had on Mugabe.

Zimbabwe was scarred by Mugabe’s decades in power. The stadium, NPR’s Peralta reported, was half-empty, and on the streets outside, Zimbabweans “feel that he had become a tyrant, that he had been cruel to his own people.”

Plus, the country has other pressing concerns: Zimbabwe’s economy is suffering. Inflation has been steadily increasing under Mnangagwa’s tenure — and according to government figures, it reached a staggering rate of 175% by June.

When Mugabe came to power in 1980, his country had high hopes for him and the newly independent Zimbabwe. He helped lead the insurrection that toppled the racist white-minority government and won the country’s first democratic elections. But Mugabe became an authoritarian. Mass unemployment, chronic food and water shortages, runaway inflation and a collapse of the country’s health care system marked his tenure.

After Mugabe lost the first round of the country’s 2008 elections, his militants and other loyalists enacted a wave of violence that killed about 200 people — and then his opponent pulled out of the race.

“It’s not that I don’t respect him,” said Tina, a realtor who would only provide NPR’s Peralta with her first name because she fears government retribution. “I do respect him so much. It is so much to remember independence, remember freedom. But in the end, it didn’t end well.”

“In Shona they say wafa wanaka (speak no ill of the dead), but for Mugabe there just has to be an exception,” wrote journalist Bridget Mananavire in the Zimbabwe Independent. “Some have vowed that the wounds and scars he left are too deep to forget and the atrocities he committed too heinous to forgive.”

Mugabe, The Associated Press reports, is now set to be buried at the National Heroes Acre monument. Mugabe actually oversaw the monument’s construction: Heroes Acre was built as a special burying place for top officials of the ruling ZANU-PF party who helped to end white-minority rule. It sits at the top of a hill, where there is a large sculpture of guerrilla fighters.

But according to the agreement announced Friday among the Mugabe family, traditional chiefs and Mnangagwa’s government, Mugabe will not be buried at the spot originally reserved for him next to his first wife, Sally. His special mausoleum will be elevated above all the other graves.