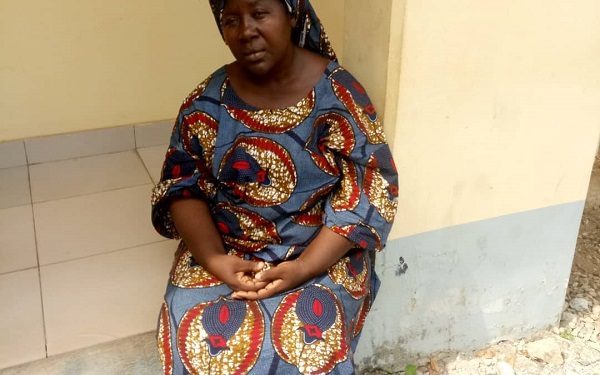 A combined team of the operatives of the National Agency for Prohibition of Trafficking in Persons (NAPTIP) and the Inspector General Police Special Intelligence Response Team, IRT, in Ibadan, Oyo State have arrested a 50-year-old, woman Idowu Ademola, who allegedly specialized in trafficking foreigners for domestic servitude across the country.

Police source disclosed that Ademola ran into trouble when a 17-year-old Togolese, identified simply as Mary, who Ademola, trafficked to the Federal Capital Territory, Abuja, to work as a housemaid sustained severe burns from a pressure cooker accident.

It was learned that Official of NAPTIP, were contacted when doctors at the hospital where the Togolese maid was being treated discovered that she was trafficked into the country illegally to work as a maid for a woman identified as Angel and her salaries were being paid Ademola.

It was further revealed that Angela was arrested by the officials of NAPTIP in Abuja and she confessed during interrogations that she met Ademola who gave her the maid through one Folake Adelore, but when she was arrested, she told the NAPTIP officials that she doesn’t know where Ademola lives.

The situation prompted a request to the IGP to deploy his operatives at the IRT headed by Deputy Commissioner of Police, Abba Kyari, to arrest Ademola.

When Ademola, a widow and a native of Okitipuka area of Ondo State was interrogated she told police that she wasn’t aware that it was criminal to bring foreigners into the country and give them out as domestic help.

She said; “ I went into business in the year 2017. I use to travel to a town named Okuta in Kwara State, which has a border with Benin Republic.

“I used to buy rice and vegetable oil from the market and I met some young ladies who are not Nigerians and they told me that they want to come to work in Nigeria and they needed my assistance and I offered to help them. That was how I started.

“I gave three boys to a poultry farmer in Sango Ota and their brother who brought them to work in Nigeria gave them to me and I got them the poultry job. They earn N12,000, monthly and I usually deduct N2000 monthly from their salary.

“The boys are between the ages of 22 and 27. I also gave three girls to one Mrs Angel who resides in Abuja. I met her through one Mrs. Folake Adelore. First of the girls was 23 years, the second was 20, and the last one was 17.

“When she collected the first girl, her father died and she left and I replaced her with second girl and during Christmas celebration the girl didn’t want to follow her to her home town at the east and she fired her and called me for a replacement and I sent her the last girl, Mary who got me into trouble.

“One month ago, I learnt that Mary was involved in an accident, she tried to open a pressure pot that was been used to cook beans and the hot beans poured on her body and injured her.

“I wasn’t aware that what I was doing was human trafficking until the Abuja incident occurred. Mrs. Folake called and told me that she wanted to know if Mrs. Angela has called me and that someone around their area has called NAPTIP, it was then that it dawned on me what I have been involved. “She regretted.