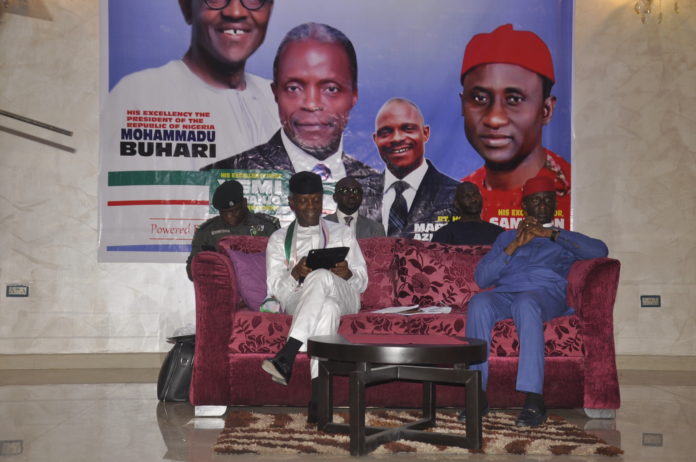 Osinbajo speaking in a town hall meeting held at Hotel Du Golf off PZ junction, Aba North Local Government Area of Abia State on Tuesday with the Aba business community and supporters of the party said that Nigeria is a country that is too big for an individual to impose a religion against their wish.

He also debunked rumours being peddled in the state by the Peoples Democratic Party (PDP) and supporters of other political parties that the APC leadership under Comrade Adams Oshiomhole reserved some state for the PDP.

The vice President while responding to questions from members of the audience disclosed that contrary to insinuations that Abia is reserved for the PDP stated that the Buhari administration was paying attention to the state because of the importance the government attached to the growth and development of the SMEs which Aba is the hub.

While thanking the people of Abia State for coming out in their numbers to vote for President Buhari and giving the party 25percent votes in the just concluded Presidential election, urged them to troop out on Saturday, March 9th to sack the PDP government whom he said has left the state underdeveloped for 16 years.

Most of the questions thrown at the Vice President demanded that he clears the air on the rumours that: his constant visit to Abia means alliance has been formed with the PDP, that his absence in the APC Abia rally connotes support for PDP as alleged.

“Abia made a historic contribution in our election as we got 25 percent votes. We know it was not all our votes that were counted. Come March 9th we shall prove that Abia is an APC.

“Abia deserves to benefit from the centre. There’s no reason for Abia to play opposition politics. By the grace of God, Abia shall join the centre come Saturday.

“That I didn’t not attend the Abia APC rally in Aba has nothing to do with any agreement. It is because I cannot be with the president at a certain  location at the same time for security reasons. I can only attend if it was in the South West because I’m from there.

READ ALSO:   "I will ensure that Abia is safe from coronavirus"-Ikpeazu

“On my frequent coming to Abia, I’ve been coming here because of the importance and centrality of the state not for any political reason of giving Abia out to another party.”

Speaking further he said: “One of the reasons why our members have not benefited from most of our programmes is because the Government is not APC. Come Saturday by the grace of God, we shall change the present day government and enthrone APC through Uche Sampson Ogah.

“The PDP want to use the media to claim that APC does not favour Christians. The president is a Muslim, I’m a Christian. A born again Christian for that matter. Nobody can Islamize Nigeria because there is absolutely nothing like that.

“Buhari has no intention of Islamizing Nigeria. He is a man who doesn’t interfere in anybody’s religion. He doesn’t force anybody to follow his. Such talks are lies and are mere political propaganda. The biggest church auditorium in the world, with 100,000 capacity is in Abuja.

The VP went further to lambast some men of God who play politics from the pulpit saying it is wrong. He went further to add that the talk about Buhari’s hatred for Ndigbo is political and untrue.

“People now play politics from the pulpit. Any pastor who is using the pulpit to preach for a political party is not doing the right thing.

“Any bishop can support a political party privately, but not on the pulpit. We started the home grown school feeding programme from Anambra State.

“The two times Buhari ran for president, he picked all Igbo men. He has always demonstrated his love for Ndigbo. Four states in the South East have four senior ministers. That’s a sign that he does not play politics.

Several groups who gave vote of thanks to the VP during the Town Hall Meeting includes: participants of the MSME clinic, SMEs Associations, N-Power beneficiaries, food vendors for the Free School Feeding and former Biafran soldiers.

They showered thanks to the Vice President for the opportunities given to all of them to make ends meet and begged him to ensure that the programmes continue.

Also speaking, Dr. Uche Sampson Ogah, APC governorship candidate said, “We receive our father with great joy. He gave us an appointment last time, but because of other activities he couldn’t make it, but today he is here.

“We say congratulations to you after a credible fair election. Despite the activities of the opposition, you showed strength because of the love Nigerians have for you and President Buhari.