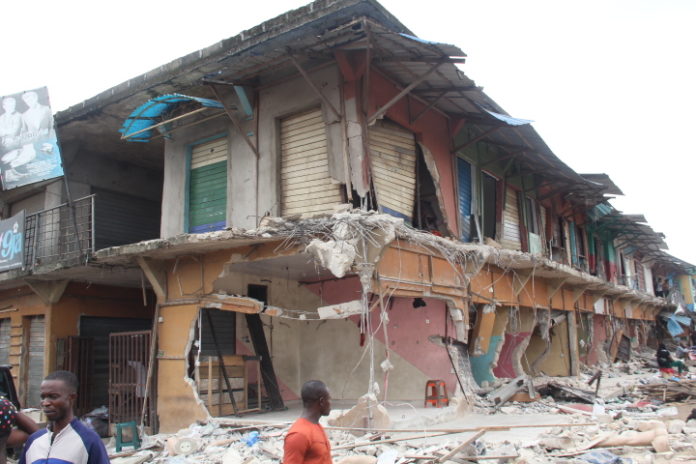 Over one thousand traders and shop owners at Enyimba Market under the control of Osisioma Local Government Area of Abia State have been displaced from their various shops and places of business as the state government through the Ministry of Trade and Investment begins demolition of illegal shops at the popular Enyimba Market.

Information gathered by our reporter has it that the shops were demolished under the supervision of combined team of security agencies and some government officials.

Our reporter also gathered that the Commissioner for Trade and Investment, Rt. Hon. Cosmos Ndukwe had given the traders in Umuahia and Aba, including those selling at Enyimba area, until Friday November 15 midnight to vacate the place as government of the state would begin recovery of spaces illegally converted to trading within Enyimba area of Ariaria International Market and Ngwa road in Aba and Okpara Square, Cooperative area, Akanu Ibiam and Bank road in Umuahia respectively.

READ ALSO:   Finally, Nnamdi Kanu opens up on how he escaped during military invasion of his father's compound

Some traders who spoke to our reporter denied being aware of the government directives.

The traders including one Mr. Joseph alleged that they lost goods worth several amount of cash while others claimed that the attempts to take away their goods while the demolition exercise was going on in the middle of the night failed as they were prevented from coming close to the scene by the security agents.

The traders who took our reporter round the area stated that over one thousand traders and shop owners have been displaced, adding that goods worth several amount of cash were lost in the demolition exercise.

According to one Mrs. Edith, the timing of the demolition of the shops is wrong with December which is usually their peak period weeks away.

“The truth is that we didn’t hear the said government announcement. The leadership of Ariaria didn’t tell us until some hours before we close for the day. When we learnt that, there is no way or any place to keep our goods. The intention was to see how we can appeal to the state government to give us time to pack our wares.”

Another trader who gave his name as Kingsley said “I was at home when I got a phone call in the midnight that our shops were being pulled down. By the time I got to here, soldiers and other security agents were preventing people from going to at least save their some of their goods. Even those that managed to gain access were not allowed to go home with their wares. The government officials around, collected the goods from them and put into their vehicles.

“All my efforts over the years have been wasted. My life is shattered. I don’t know what to do. The amount of goods I lost cannot be quantified. We have paid to both the local government and the state government stallage fees and among other official levies. We are not on the road and can never be described as street traders.

“I am appealing to the state government to come to our rescue. This burden that they have hang on us is too heavy for us.”

The Commissioner for Trade and Investment could not be reached for comments, but a source in the ministry said that the traders were economical with the truth.

According to the source who pleaded not to be named, accused the traders of abandoning their shops in the market to come to the streets to trade, which the source said has been defacing the area and causing gridlock on the road.

The Source there have been radio and Television announcements since November 5 that the government gave the traders including those at Enyimba axis of Ariaria International Market 14 days grace period to vacate from the area.

The traders at the time of our reporter’s visit were trying to see if they could salvage anything from their demolished shops, while scavengers were having a field day picking debris that they could lay their hands on.