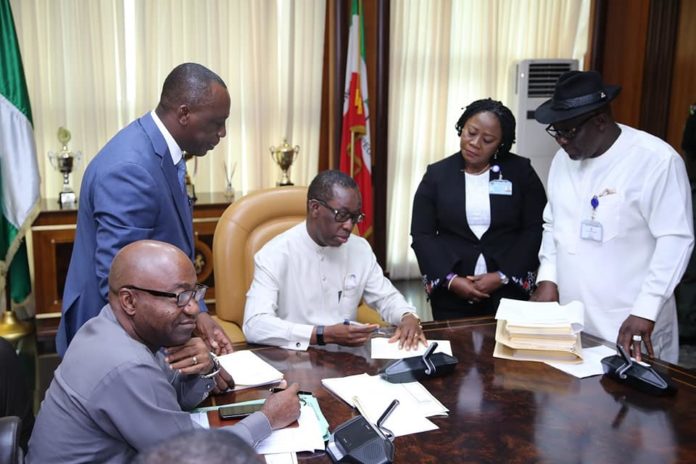 The Governor of Delta State, Ifeanyi Okowa on Thursday signed six bills presented to him by the State House of Assembly into law.

The bills including Warri/Uvwie and Environs Special Area Development Agency bill which had already become a law is geared towards providing good governance to the people of the state.

“It is a collective responsibility for all Deltans to contribute towards building a virile state that will be the pride of all.

“Speaker of the Delta State House of Assembly, Rt. Hon. Sheriff Oborevwori who was accompanied by his Deputy, Rt. Hon. Friday Osanebi and other principal officers of the legislature, presented the bills to me.

“One of the bills which has now become law is the Warri/Uvwie and Environs Special Area Development Agency bill.

“I believe that from the beginning of my second tenure, we will pay special attention to the development of Warri, Uvwie and environs as I promised the people; this agency will ensure the maintenance of existing infrastructure and improvement of general infrastructure in the area.

“Other bills that were signed into law includes Bill to provide for the establishment of the Delta State Urban Water Corporation, Small Town Water Supply and Sanitation Agency, The Rural Water Supply and Sanitation Agency, The State Water Sector Regulatory Commission; Bill to Regulate the Registration, Establishment, Operations, Conduct, Monitoring and Inspection of Private Health Care Facilities in Delta State and other matters incidental thereto; Bill to Amend Delta State Capital Territory Development Agency; Bill to provide for the Audit of Public Accounts of the state Ministries, Departments and Agencies of Local Governments and other Matters Connected therewith; and the Bill to Establish the Customary Courts and to provide for the Composition and Appointment of Chairman and Members, Structure and Administration, Jurisdiction and other Matters Connected thereto.

“I commend the Delta State House of Assembly for being great partners in this administration’s efforts to develop the state.

READ ALSO:   Ese Oruru: Court sentences Yinusa Dahiru 26 years in prison
Disclaimer: infonte9ja.com shall not be liable to Opinions, Articles or Features that doesn't emanate from any of its staff and management. We also wish to reiterate that such personal or sponsored opinion, article or feature does not reflect the views of the publishers of infonet9ja.com, but the writer's For publication of your news content, articles, videos or any other news worthy materials, please send to infonetnews9ja@gmail.com | For Advert and other info, you can call 09061217047 or send a WhatsApp Message to 09061217047

“I took time to explain the importance of the bills that were signed into law, commended the Delta State House of Assembly for spending time to do their job thoroughly; you have done a lot to impact on our people, and we will continue to need the cooperation of the House of Assembly to develop our state; as we work and partner with the rest of the state and the Judiciary, we have course to smile as we build the Delta of our dreams, a stronger Delta State.”