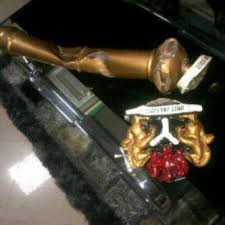 Members of Jigawa State House of Assembly have reportedly broken the House Mace of the State Assembly when they engaged in a rowdy session on Tuesday.

The mace, which is a symbol of authority, was the target during the brawl between the lawmakers as they disagree on an amendment to the standing rule guiding qualification for leadership position at the house.

Isa Idris, Speaker of the State House, had announced a move to amend the rule banning former assembly speakers and deputy speakers that were impeached or suspended from contesting for the speaker of the assembly.

The announcement divided the lawmakers; while some supported the move other groups vehemently opposed it.

The ensuing quarrel escalated with members engaging in free-for-all session.

It was gathered that Alkassim and his group are working on moves to return Idris Jahun, a former Speaker impeached three years ago to the leader of the state assembly.

While the fight was going on, some lawmakers aimed for the mace and it broke into three parts while they were dragging it among themselves.

READ ALSO:   FOR THE LOVE OF STATE; Unedited text of Dr. Alex Otti's press conference on state of governance in Abia

Journalists and staff of the house were sent out during the quarrel.

Normalcy was restored to the house after about 15 minutes of rowdiness.

Lawmakers were forced to adjourn the plenary with anti-riot police operatives taking over the state house.