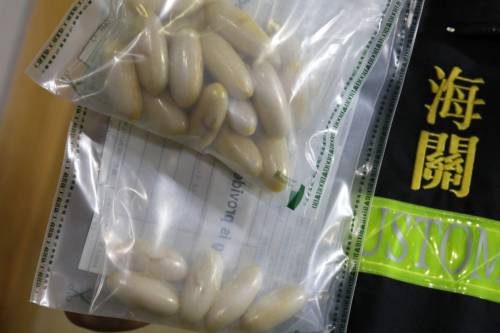 Customs officials in Hong Kong have arrested a Nigerian woman who landed at the Hong Kong International Airport on Thursday with more than half a kilogramme of cocaine hidden in her body, South China Morning Post is reporting.

According to the Hong Kong-headquartered Asian paper, the 37-year-old, who claimed to be a businesswoman, arrived in the city on a flight from Lagos via Addis Ababa, Ethiopia.

She was said to be acting suspiciously, shortly after her arrival on Thursday, hence she was taken to hospital for a check-up that confirmed she had foreign objects in her body.

“She was taken to Queen Elizabeth Hospital in Yau Ma Tei for a check-up and confirmed to have foreign objects in her body,” the paper said.

“Officers first recovered 215 grams of cocaine contained in condoms and plastic bags found in her vagina. She later discharged 24 capsules of cocaine, each weighing 14 grams, from her body.

READ ALSO:   Teenager drugs roommate with tea, steals 918,000 properties
Disclaimer: infonte9ja.com shall not be liable to Opinions, Articles or Features that doesn't emanate from any of its staff and management. We also wish to reiterate that such personal or sponsored opinion, article or feature does not reflect the views of the publishers of infonet9ja.com, but the writer's For publication of your news content, articles, videos or any other news worthy materials, please send to infonetnews9ja@gmail.com | For Advert and other info, you can call 09061217047 or send a WhatsApp Message to 09061217047

Under Hong Kong’s Dangerous Drugs Ordinance, the maximum penalty for drug trafficking is life imprisonment and a HK$5 million fine.